The Japanese company Renesasas and Indian production partner RelySys, based in Bangalore, India, have launched the SMARC 2.0 SoM module, which contains Renesas’ RZ-G2 family with two cortex – octa-core A57 and -A53 SoC. It’s evolutionary. The Linux-based module uses the larger version SMARC 82 x 80 mm and contains various PMICs, clocks and other Renesas-built chips.

SMARC 2.0 SoM supports three of the four RZ/G2 models by skipping the A53 RZ/G2E dual-core Cortex:

The SMARC 2.0 SoM is equipped with 4K UHD H.265 and H.264 codecs and is designed for IoT face/object recognition, HMI for industrial and building automation, machine vision, CCTV cameras, inspection equipment and embedded vision systems. It is the first RS/G2 based product with the exception of the two 96Board development kits announced by Renesas at the SoC in February 2019. Other SMARC modules based on Renesas processors are the small SMARC Mistral RZ/G1E, which runs under Linux on a Dual-Cortex-A7 RZ/G1E.

The module is equipped with 2 GB or 4 GB LPDDR, including optional ECC RAM. You also get a 512 MB SPI-Flash and a downloadable eMMC up to 32 GB.

SMARC 2.0 SoM is equipped with a 10/100 Ethernet controller and an optional dual-band WiFi/Bluetooth module. The module offers 1x or 2x (RZ/G2M only) PCIe interfaces and SATA connection (RZ/G2N and RZ/G2H only). 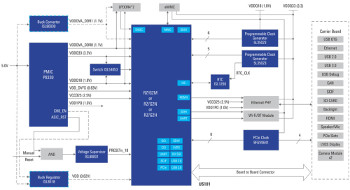 Other interfaces are USB 3.0 host, USB 2.0 host and OTG, 2x SDIO, 2x CAN, 3x UART and 5x U2C. There are the same SPI and QSPI interfaces and different GPIOs.

Renesas IS includes the PMIC P8330 and the small real-time clock ISL1208, which is powered by a small 400nA battery or super capacitor. The module also includes the 9FGV0641 PCIe clock with 6 differential 100 MHz clock outputs and support for PCIe Gen4, as well as a dual programmable VersaClock 3S clock with integrated 32,768 kHz COD, powered by a button cell.

Renesas provides the Verified Linux Package (VLP), the AI software library and the Very Long Term Support Kernel (SLTS) for Civil Infrastructure (CIP), a feature highlighted in the RZ/G2 announcement. Other features include a software development environment and an optimized performance tree and programmable time.

The video on the product page mentions a demo system with a carrier board that is not part of the two existing 96Board sets. The card has an HDMI connection, two MIPI-CSI camera interfaces, an LCD screen and other functions.

SMARC 2.0 SoM is now available for an unlisted price. More information can be found in the Renesas ad and on the Renesas and RelySys product pages.